Early Election Results Point to a "Runoff" in March

Thank you for your prayers this past weekend for God to be glorified in the national election process in Senegal and the outcome.  Unofficial results from Senegal's presidential election suggest a tight race between incumbent Abdoulaye Wade and former Primer Minister Macky Sall. Here's a link to a BBC article from this morning.
Link to BBC article on Election Results
The results will not be finalized until Friday, March 2 at the latest. The initial feedback appears that  the democratic system in Senegal worked and many people came out to vote. Here's a link to many pictures that show people voting in large numbers in cities, small towns, and rural villages. Please continue to pray for God's will to be done and for physical and spiritual protection for the church in Senegal.
Link to Photos from the Feb 26 Election
Posted by CFC Senegal Team at 10:31 AM No comments:


Stay current on the events this week in Senegal leading up to the national elections this Sunday, February 26.

National elections are scheduled in Senegal for February 26th. The current President has been approved to run for a third term which has fueled much protesting from the people. There are 14 candidates running for the office of President. If there is no clear cut winner on Feb 26, the run off election will be March 18. Our team is scheduled to travel to Senegal March 15-24. Watch the videos below and then take time to pray for God's peace to reign during the elections.


Link to video of President Wade running for a 3rd Term
Link to video leading up to Senegal National Election scheduled for February 26
Posted by CFC Senegal Team at 7:37 PM No comments: 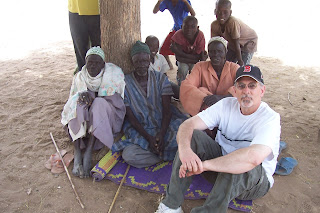 Watch and pray through this 3 minute Prayer Cast video focused on the West African nation of Senegal. The images accurately portray the life in the big cities such as Dakar as well as village life. May Jesus, the Light of the World, shine brightly in this nation. Click on the link below and wrestle with us in prayer.

"Nafio" is Serer for "Hello, how are you doing?"

Greetings in Senegal are very important. Because relationships are so important, you greet each person by name and run through a series of questions to let them know that you value their friendship.

Our team is learning some basic greetings in the Serer language. The village of Babak is a Serer village. If you'd like to get a flavor for what our team is learning, click on the link below and listen to the typical way of greeting one another in Serer.

Link to Serer Greetings
Posted by CFC Senegal Team at 2:52 PM No comments:


Mission Inter Senegal (MIS) is a church planting organization in , . Its vision is to reach 400 “unreached” villages with the Gospel and see churches planted and reproducing by 2020. These villages represent about 500,000 Senegalese from the Wolof and Serer tribes. CFC began our partnership with MIS in 2004 and became part of their Adopt-a-Village program. We adopted the . Pastor Antoine shepherds a small church in the village and reaches out to 4-5 surrounding villages. Through tangible projects, a foundation of trust and friendship has been built with the Muslim leaders in the village. During our 2005 visit, we were amazed to hear Chief Diouf welcome our team in Jesus’ Name. He shared the truth that we worship the one true God and that our God answers prayer.

Babak is a Serer village with a population of about 1600 people. Pastor Antoine is trusted by the Elders of the village. Babak is a wonderful testimony of MIS’ holistic church planting strategy that includes water projects, medical care, literacy programs, women’s vocational training, and micro-finance programs all in support of the church planting focus. Each year we have worked with MIS, Pastor Antoine and the Elders of Babak to identify various projects that would meet tangible needs within the village and provide a powerful witness for Christ. 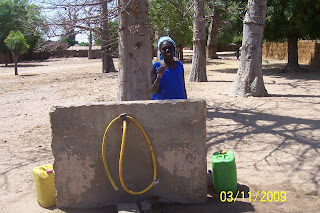 Antoine worked with the Elders of Babak to establish a cereal bank where people contribute to a community reserve to assist those in need when the harvest may not be as plentiful. CFC provided funds a few years ago for the church to purchase a grain mill. This has simplified the process of grinding millet and the entire village has benefited from this gift.

The government funds a health hut in the village and numerous mobile clinics sponsored through MIS have been conducted in Babak. We conduct 3-4 medical clinics each year during our short term trips to . The clinics allow us to demonstrate the love of Christ in a tangible way and they open the door the church planters to build relationships with those in the village after we leave.

The village school provides opportunity for the children to learn to read and receive a well rounded education. In 2006 we provided the funds to build a fence around the school.

Pastor Antoine has been reaching out to 4 surrounding villages to build relationships and plant churches. We have been blessed to be able to conduct medical clinics in these villages and witness the power and love of Christ and how God has been opening doors for the gospel though these projects. In two of these villages, the Chief and Elders have allowed for the construction of church buildings where the growing number of Christians can meet for worship. In 2008 we were privileged to be present for the first baptism service in the Babak where 14 people publicly identified with Christ as their Savior. 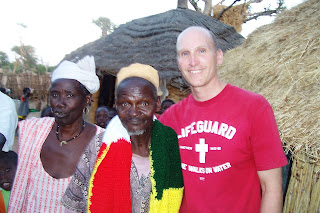 Two years ago we shared a meal with the Elders of Babak and presented them with special gifts expressing our love for them. We were humbled by their invitation to come and live with them in Babak. We long to continue building relationships with our brothers and sisters in Christ as well as the Muslim men and women who we have been blessed to meet. It is our prayer to see Babak transformed for Christ and the Kingdom expanded through the surrounding villages.This partnership with MIS and the village of Babak has helped our church to develop a greater appreciation for what God is doing in West Africa.

For the past two years, people from CFC have sponsored 25 children in the village. The funds go to MIS and they in turn help to pay for school fees, supplies, uniforms, tutoring, medical care and spiritual coaching through Kids Club. During our annual visits to Babak, we meet with the children, deliver gifts and letters from their sponsors and hang out with them throughout our stay. 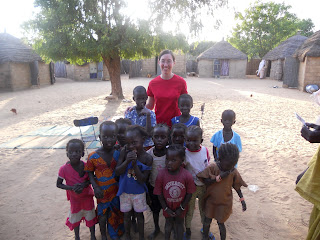 This year our prayer is to raise enough funds to purchase 600 mosquito bed-nets for the 200 families in the village. Each day, more than 2,000 children die from malaria related illnesses around the world. Progress has been made in Senegal to reduce the mortality rates with malaria in the larger cities but the net distribution program has not penetrated many of the villages. This will be a wonderful, tangible witness of the love of Christ to the entire village. We are thrilled to report that the Lord has provided the funds through the cheerful and generous gifts of our congregation, to purchase more than 1000 mosquito nets. We’ll be able to bless the 200 families in the village of Babak with 600 nets as well as bless the village of Ngonine and other villages with the remaining nets.
Posted by CFC Senegal Team at 10:01 AM No comments:

Less Than 5 Weeks and Counting!


God is so good. Our team met last night as we prepared for our March 15-24 trip to Senegal. We reviewed our tentative schedule with great excitement.


We thank the Lord for the generosity of the people at CFC who have contributed enough funds for over 1,000 mosquito nets. We will bless the 200 families of Babak with 600 nets and the balance will go to Ngonine and other villages with the greatest need. In addition to the nets, our people have written over 100 prayers of encouragement that we will share with the village.

If you would like to get a flavor for the Serer language spoken in the village of Babak, click on this link and listen to the typical way of greeting one another in Serer.

Link to audio of Serer Greetings

Official language: French. Language of wider communication, Wolof; spoken as a first language by around 40% of the population Languages: 46

Prayer Needs
Spiritually, Senegal is both open and closed. The nation enjoys religious freedom and is remarkably tolerant toward other faiths – a point of pride for Senegalese, perhaps because so few Muslims have ever come to Christ. Despite a longstanding Christian presence and outreach, a spiritual heaviness covers the land. Allegiance to religious leaders renewed in each generation prevents any significant people movement to Christ. Virtually all Wolof, Fulbe and Mande peoples remain Muslim. Pray for the spiritual breakthrough for which so many wait.
Islam dominates religious life, growing from about 45% of the population in 1900 to over 90% by 1960. The Muslim Sufi brotherhoods are well organized, wealthy and politically powerful; over 85% of all Muslims belong to one of them. The Mouride Brotherhood is virtually a state within a state, based in their capital, Touba. But aggressive Islamist groups funded by Saudi Arabia and Libya are making inroads and threaten the tolerant status quo. Pray that religious tyranny might be thwarted, and that God may use all forces to draw people to Himself.

click map to enlarge
Posted by CFC Senegal Team at 12:42 PM No comments:


Our team has formed for our March 2012 return trip to Senegal. There are 12 members on this year's team. The trip dates are March 15 through March 24, 2012. We'll be posting more specifics regarding the trip in the coming weeks and months.

We will help with a number of medical clinics as well as support the efforts of Mission Inter Senegal in our adopted village of Babak.

Financial Support
If you would like to support the team financially, you may send a tax deductible contribution to:
Calvary Fellowship Church
Attention: Pastor Mike Edelman
95 West Devon Drive
Downingtown, PA 19335

Please make your check payable to Calvary Fellowship Church and write Senegal 2012 on the memo line. On a separate note indicate whether you are supporting a specific team member or making a general contribution to be used as needed for the trip.

Special ProjectWe hope to raise enough funds to purchase at least 600 mosquito nets for the 200 families in the village. Each net can be purchased in Senegal for approximately $7.

Prayer Support
Our greatest need is prayer support during the next three months leading up to our trip as well as throughout our 10 days in Senegal.
To join our Senegal 2012 Prayer Force, send an email to Pastor Mike Edelman at medelman@calvary-fellowship.org and.or become of follower of this blog to automatically receive updates.
Posted by CFC Senegal Team at 12:39 PM No comments: